US-China trade tension: Google retrieves Huawei system and apps license. What is next? 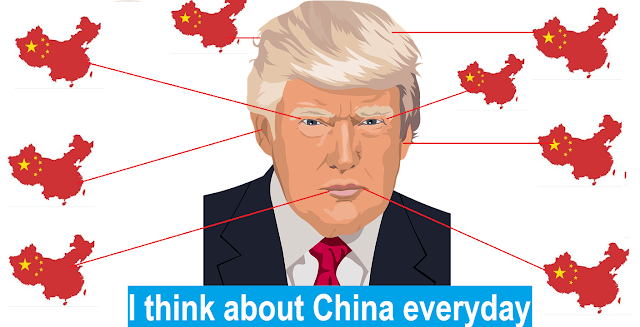 Trump is unpredictable as USA which earlier ban on Huwei from buying Chips made-in-US and later gave Huawei 90 days of grace starting May 19 2019.


Recently, when I wrote an article China-US 5G Network War. many people reacted by calling USA out. Analyst analyzed and criticized US action against China as below.

The key points that are being speculated here are:


1. US(Trump) is not happy that China first launched 5G network.

2. Huawei has its own weakness when secret emails between Huawei and inside in T Mobile was leaked and exposed. This is tech thief according to USA.

3. Donald Trump is not expert in technology as he tweeted about 6G network when 6G network is not visible.

4. US is not happy about Chinese economic explosion, they are afraid that China will snatch world power from them.


5. China in other hands has the problem of fake and inferior products, this is a big problem why Chinese manufacturers are smiling to the bank, their fake products are causing havoc in other countries.

6. US may succeed in imposing high tariffs to China but US citizens will pay the price.

Back to business of the day. Earlier this year US through Trump accused Chinese company Huawei of spy and lobbied other countries not to trust Huawei with 5G technology. This sounds funny because Trump is not a Tech Engineer, how did he know much about technology?.


Trump didn't stop at the campaign only but also ban US from selling phone Chips to Huawei. After thinking of loosing $11bn annual revenue from Huawei, the unpredictable Trump made a U-turn and gave Huawei 90 days of grace starting from 19th May 2019.

Interesting and funny and more like a joke Google slapped Huawei with another punishment restricting Huawei from using Google licensed system apps.

What does this means from tech experts?
No more Google Play Service and Google Play Store in Huawei androids. Are you kidding me?

Apple still suffers set back because it couldn't adapt android technology. Nokia was forced to leave Lumia technology because of android demand. Samsung didn't wait to join full android. LG is not left out. Infinix, Tecno and others find their way in Africa because of android OS.

USA revised its decisions on Huawei buying chips from USA by given them 90 days grace, will Google follow suit by given Huawei another chance or more days?

What is actually going on? Is this a witch-hunt of China by Trump for Chinese economic success story or Trump is exercising his veto economic power?

As my friend (Seun) put it in comments section

"May be you need to read about past antecedent of America.

Thirty years ago, Toshiba exported precision instruments to Russia. The United States has imposed the following penalties on Toshiba Group

3: A 100% tariff on Toshiba products sold to the United States

4: As an alternative punishment to the previous one, Toshiba's exports to the United States were banned for five years.

5: A huge fine of 1 trillion yen was imposed on Toshiba, equivalent to $16 billion today.

In order to calm the anger of the United States, Japan has imposed severe penalties on Toshiba Group:

Second, Toshiba spent 100 million yen to publish a full-page apology advertisement in all major newspapers in the United States.

Thirdly, Japan Semiconductor Association invested 9 million US dollars to launch various relations lobbying in the US Congress, and this lobbying has become the most costly lobbying war in history.

Fourthly, the chairman and general manager of Toshiba Group resigned.

Fifthly, by an administrative order issued by the Ministry of Communications, Toshiba is prohibited from exporting any products to 14 countries for a period of one year.

The United States is the master of Japan, Japan can only apologize, which has led to Toshiba gradually losing its past glory.

Toshiba was the hope of Japan's science and technology industry, and also the hope and pillar of Japan's manufacturing. After suffering a heavy blow from the United States, Toshiba went downhill thoroughly.

Looking back more than 30 years ago, the experience of Toshiba, Japan, and looking at what the United States is doing today, there are indeed many similarities.

Therefore, the United States will not allow 5G in the world.


Let the world know the true & ulterior reason for USA's insistence on bringing down Huawei.

This is not peculiar to Huawei and Toshiba, French company have suffered similar issue in the past and presently Russian oil company Rosneft and millitary equipment giant that produces S-400 surface to air missile even Canada's Bombardier is suffering the same thing with different excuses.
The hidden truth is America finds away to distroy corporation they can't compete with, right now Huawei is their biggest problem in telecommunication, Rosneft in Gass sector and Almaz—Antey (S-400).

In the case of Almaz-Anty S400 manufacturer, it is the buying countries that American government wants to sanction to deter countries from buying it and increase the chance of Thaad and Patriot sales".

The is same way US killed other super-power technology giant companies in other countries which US is afraid of.

The world will only be a better place if you can give other people playing field no matter their cultures, colour, country, language and economic differences.

From the look of things US will not rest until they pitch China where Chinese will feel the pitch economically.

The truth remains the trade war between US-China is nothing but selfish interest, politically motivated and fear of economic power overtake.

The only problem I have with China is fake products but any country buying these products will have standard organization to checkmate the products. Is like quality control in China is being compromised to quantity control.

Trump who is not expert in technology should stop controlling Chinese Tech Giant company Huawei instead ask US companies to learn from them.

To me no matter where a product came from and meet some standard I don't care. If I will buy a phone of $500 with $300 with same quality why should I waste $200.

The moment Trump focus on US job creation and stop interfering in other countries affair the better for him and his allies.