Google is closing Inbox by Gmail and Google plus + comes April 2, 2019

One will be wondering what is happening with Google? Is because these medium is not given them the expected revenue or they are tired of the social media.

You will Like How to detect Virus in android phone.

In case you don't know Google plus just like twitter and linked with followers which some markets. Some people have millions of followers and use it to help people and also sell their products. Google plus is the first place bloggers share their articles and post.

As if the warning of shutting down of Google + is not enough google came again with Inbox by Gmail shutdown.

In September 2018, it came as shook to many google fans and application users when it was announced that Google will shut down Inbox by Gmail comes March 19 2019. Is still surprising that up till today being 22 March Inbox by Gmail is still working. But there is a strong indication that on April 2, 2019 Google will shut it down. What caused the shift of date is what we don't know.

Google Giant company started showing this message since 2018 ending about their intention to close Inbox by Gmail. If you are used to read pop up messages then you can remember that something like this used to come up in android phones. 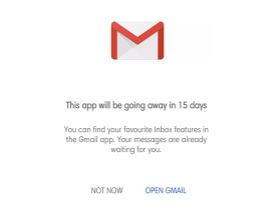 I am glad that ever since I started internet journey, Yahoo mail has always be my primary email. But at same time I still wonder what will happen if  Google delete Inbox. What about millions of business messages stored in it.

See people reaction about the shutdown

As if Google+ and Inbox by Gmail shutdown rumor is not enough the chat messaging service just like Whatsapp know as Google Allo has been taken down. According to Google "we say goodbye to Google allo March 12, 2019. During our time together we brought you a smarter way to chat...Allo for web and selfie stickers."

Following the story one will be confused on what next will Google do.....!.