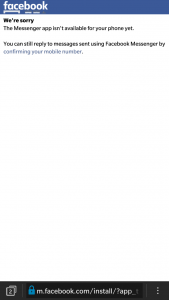 FACEBOOK MESSENGER AND OTHER SOCIAL NETWORKS WITH BLACKBERRY PROBLEM


Recently, I wrote an article problem with whatsapp and other phones where i explain how Whatsapp will not be working for some phone user by end of this year.

Well when I heard about Facebook Messenger which Obama is also  using I thought that a rescue for whatsapp has come. Am wrong because this app is not supporting BlackBerry 10. In the sense that Facebook be a partner of whatsapp has the issue of rejecting blackberry.

My question do BlackBerry that is RIM company has a private issue with facebook or whatsapp or any other social network. If the answer  is no why can't I use Facebook messenger on Blackberry 10 series. Or why do I keep getting this warning mesage on my blackberry Z3 handler that comes 30 December 2016 that whatsapp will stop working on this device. Why can't i use my facebook messenger. If the answer is yes -what is the secret reason behind all these problems.

See this picture below.


I downloaded it with BlackBerry Z3 and installed but only to end up with this picture, it never worked!

I don't really know is any other person using BlackBerry 10 series is facing the same challenge because I have tried many like BlackBerry Z30, Blackberry Classic, BlackBerry Z10 Blackberry Q10 and soon but the story is same. You will only see white screen and indication of software running  nothing more or less.

Get whatsapp on your BB10 that will not expire

But I didn't. I said let me try this application or  stop there PC i got this information. It seems the computer information is better in the sense that you can see a logo of facebook messenger. I waited for hours but only the logo remains.


What is happening to social media, why are they depriving people the use of their applications?

There is a rumor recently that Twitter may shutdown.