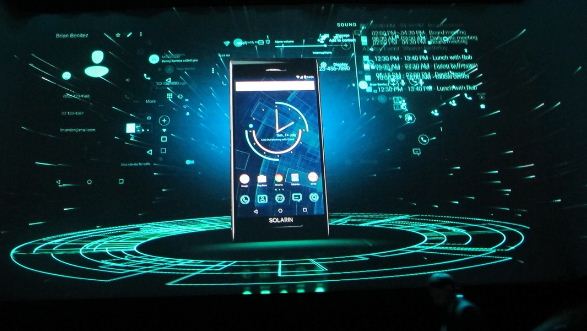 Sirin Solarin smartphone was launched in May 2016. The phone comes with a 5.50-inch touchscreen display with a resolution of 1440 pixels by 2560 pixels

The Sirin Solarin is powered by octa-core Qualcomm Snapdragon 810 processor and it comes with 4GB of RAM. The phone packs 128GB of internal storage cannot be expanded. As far as the cameras are concerned, the Sirin Solarin packs a 23.8-megapixel primary camera on the rear and a 8-megapixel front shooter for selfies.

The Sirin Solarin runs Android 5.1 and is powered by a 4040mAh non removable battery.

Sirin (full name Sirin Labs) is a new entrant to the mobile technology arena and it claims to have one simple goal, "to bring tomorrow to our customers, today". After two years of R&D, Sirin Labs launched its first smartphone in 2016 - the Solarin.

A star-studded London launch with actors Leonardo DiCaprio and Tom Hardy. Premium materials like titanium and leather. These are not the reasons anyone would want to buy a $15,000 phone (or £9,000 or AU$20,000 -- with taxes).

But if Sirin Labs, the creator of the ultrapricey Solarin phone, has its way, a little switch on the back will bring celebrities, government officials and other Very Powerful and Important People flocking. Rich people, who have plenty of cash to spare.


Meet the luxury phone for the super-rich and super-paranoid
The switch in question turns on an enhanced security mode that encrypts messages and limits much of the Android phone's hardware and software capabilities. You would use this when sharing extremely sensitive information, the kind of heady stuff that Sirin Labs imagines would make Solarin owners a target for hackers.

To that end, the company joined with two other security firms, Zimperium to guard against threats, and Koolspan, which boasts military-grade chip-to-chip encryption with 256-bit AES. Security support waits on 24-hour standby.

Solarin isn't meant for the mass market, which is probably the only thing saving it from being a complete farce. Its core customers are "international business travelers that spend much of their lives on the move," Sirin Labs CEO Tal Cohen told CNN.


The phone comes in four styles, which become increasingly more expensive depending on the material. For example, the crystal white-carbon variant -- which has black diamond, black crystal, white carbon and leather -- costs $15,900 before taxes. If you really wanted to, you could buy the Solarin now online or at a few stores in London.

We are not associate with wireless organizations like Nokia,Samsung,Sony Ericsson,Lg,Motorolo and some other and so forth Makers/Merchants .All trademarks are the property of the particular trademark owners.we simply give outlines to ponder and repairing reason.